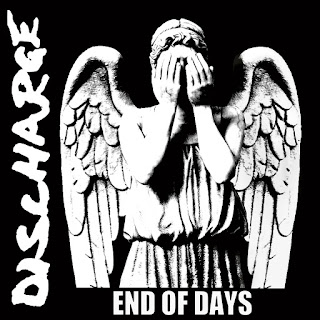 The unflinching disturbers of the peace return

The "Fight Back" EP released by Discharge in 1980 was the most powerful statement of youthful resent I had ever heard. Nothing else of that time came anywhere near to matching it for fury and aggression. They were the outraged pacifists writing culturally specific protest songs in a thundering vortex of words and noise that became the architecture of their identity. The scrapping backbone of their razor-sharp hostility was a dogmatic anti-establishment venom that voiced the unflinching scorn of their intellectual conceit. Of every era they've been involved in none sums their importance up better than the two year period from their 1980 debut Realities Of War to 1982 single State Violence State Control  the music they released during that specific time defined history, generated it's own sub-genre and instigated a movement that grew up around them. A perpetual echo of shuddering perfection as significant now as it was then. Rebellious malevolence never sounded so good.

It's now almost 36 years since their historic debut and...following several unfortunate line up changes and long periods of directionless inactivity Discharge are back....their recent signing to Nuclear Blast Records has already produced several single releases and now comes a brand new album End Of Days.. their first since Disensitise in 2008. With new front-man JJ Janiak (from Broken Bones) joining drummer Dave Caution and original members Tezz, Rainy and Bones..Discharge are, for the first time in their history..a five-piece band.

Album opener New World Order begins with a stop/start hammer of disjointed buzzsaw guitar that lurches in forward/backward agitation amid a squalor of feedback and pounding drumbeats...poised to charge.. it bristles in a repetitive 20 second distortion of stammering false starts before eventually exploding into a brutal head mashing racket of thrash laced hardcore. and surging double bass drumming, an undeniable heaviness that suddenly veers to a change of pace and reveals a softer centre of guitar solo rock-catchiness. The scathing Raped And Pillaged is a venomous anti-war song railing against the belligerent Islamaphobic Bush regime and their power-crazed invasion of Iraq "invaded in the name of corporate interests" growls JJ with a sneering derision. The title track opens with a sample of dialogue from Patrick Allen's grim nuclear voice-over narration in the public information film Protect And Survive which leads into some shattering  guitar work amid a crushingly powerful drumming barrage.

And onwards they march..the verbal aggressors and their voracious iconoclastic discourse, through...The Broken Law...False Flag Entertainment...Meet Your Maker...with demented intensity and into recent single Hatebomb a catchy lyrically simple detonation of hairtrigger anti-social aggression for the sake of it..frontman JJ's volleying bare boned spite "your opinions make me sick"  as a rollicking  D-Beat drumming thunders its way through..the guitar playing is especially good on this song with some catchy riffs enhancing the entire sound. Killing Yourself To Live is a hard edged viciously fast whirlwind of thrashy guitar/drums while the brilliantly titled Looking At Pictures Of Genocide features a complete change in guitar output. The album hurls towards its end with the frenetic divebomb of Population Control...slightly slower paced The Terror Alert which includes waves of sweeping guitar solos and final track Accessories By Molotov (Part 2)  is a hyperbolic mix of muscular thrash metal and visceral guitar driven buzz punk.

Discharge have always been capable of accurately representing a mood by being in tune with the mindset and here is no different. This is their best album since Hear Nothing See Nothing Say Nothing and a glorious return to form. The volleying sociopolitical agit-prop sermons backed up with..furiously heavy thrash/punk/metal guitar riffs.. pounding D-Beat drumming artillery and rumbling bass chords..all deployed at breakneck speed...is a powerhouse of uncompromising contempt. From simmering frustration to screaming outpourings of vicious anger...they are still the vocal subconscious of  non-conforming nihilists..That this 15 track album takes just 33 mins from beginning to end is another 'typically' Discharge trait....they've always been very good at putting all their strengths into the smallest of spaces. JJ Janiak has slipped instinctively and without fault into a role so ingrained in nostalgic regard it must have been easier to get things terribly wrong than it ever would be to achieve something even close enough to being acceptable.  Discharge haven't just continued, they've intensified.

Posted by The Morbid Romantic at 11:41 am