A Song For Sunday

I can't think of a better way to cheer a Sunday up than with a Christmas song that lasts just 34 seconds! It's the catchiest half minute you're ever likely to have...so be thankful for it and be filled with joyous luv-buzz happiness.

Posted by The Morbid Romantic at 2:20 pm No comments:

Glasgow singer/songwriter Jim Diamond has died at the age of 64. The singer, whose hits included I Should Have Known Better, Hi Ho Silver and I Wont Let You Down passed away at his home in London. A spokesman for his family said they were 'deeply shocked by his sudden death' adding 'He was a devoted family man who loved his wife Chrissy and his children Sarah and Lawrence. He will be much missed by everyone who knew him'. His death comes less than a fortnight after announcing his mother Sarah had died.

Jim first made the UK singles chart in 1982 as singer with PhD - the single I Wont Let You Down reaching number three. He went on to gain international acclaim as a solo artist with the hugely successful I Should Have Known Better a UK number one in 1984 and  Hi Ho Silver - the theme tune for ITV series Boon which reached number 5 in 1986.

May you rest in peace...Scotland's answer to Ray Charles....we will miss you dearly.

Posted by The Morbid Romantic at 1:24 pm No comments: 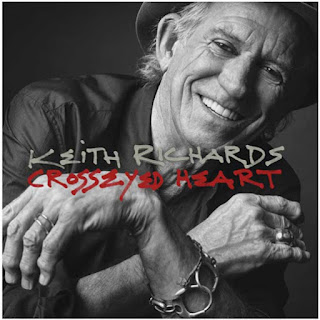 He is the quintessential rock & roll star.The literal definition. A rough edged, hard living vagabond spending almost 50 years on the drugs and booze frontline - this connoisseur of excess and hedonism who has wrong-footed and body swerved his own death so many times he has possibly earned the right to .live forever. As much as his widely documented exploits may have their place in popular culture it's in the formidable Rolling Stones songwriting partnership with Mick Jagger that the sheer magnificence of his greatness truly shines. And  in songs like...  Jumpin Jack Flash, Brown Sugar, Paint It Black and Satisfaction they have created some of rock musics greatest moments.

His new solo album Crosseyed Heart, the first since 1992's Main Offender, is deeply rooted in the music he is influenced by. It's the essentiality of the man, a compendium of distinction in measured parts of accomplished musicianship from bluesy rock and Americana to jazz, reggae and straight up ballsy rock and roll. Roughly hewed, lovelorn, beautifully crafted and with a passion that sears for an honesty divulged,

Opening with the title track, a gentle eight-bar acoustic blues that clocks in at under two minutes,His rasping vocal, all worn out and life roughened, as he deliberates  '(Oh she's sweet but she drives me round the bend/ I go round the corner and find another friend/ I got a crosseyed heart) across the unflinching briefness of its entirety. The Country-tinged lament Robbed Blind is clasped in atmospheric piano and brooding pedal steel guitar. His sleepy, half-spoken vocal rattles with a subdued anguish as he interprets the lyrically tender tale... (the heart you stole was mine) with a profuse vulnerability.

The pre-released single Trouble is trademark Keith Richards, a riff-swaggering rock & roll song with hook laden bluesy-rock guitar chords - his cracked vocal delivery on the chorusing 'Baby, trouble is your middle name' powers its way through the Stonesy-styled grooves. The formula is similar on the melodic, guitar-driven Heartstopper and funky R&B track Substantial Damage.

One of several standout moments is his reggae tinged cover of the Gregory Issac classic Love Overdue complete with horn section and a surprisingly warm and tender Keith Richards vocal delivery that oscillates with a depth and character you would never have believed him to be capable of.  Less so the drawn out cover of Leadbelly's Goodnight Irene which fails to justify its place here and becomes the albums only real disappointment.

A collaboration with jazz singer Nora Jones on the yearnful Illusion sees her smoky, deep reaching tone weave tenderly around the reflective mood of his 'Just an illusion that's for sure/Nothing that you've seen before' they sing, sharing lines and switching roles.. while  frenetic nod to his Chuck Berry influence Blues In The Morning is an energetic 50's rocker featuring longtime friend and collaborator the late Bobby Keys.

This album is the very best of his solo efforts to date...a snake tangled, liquor drenched, rough diamond rocker with scattershot rural Americana and some sweet little rustic country blues all heaved together brilliantly. Personally I think it's better than anything The Rolling Stones have done since Exile On Main St.....and it's right here that you truly understand the fundamental importance of Keith Richards....right down to that ragged machine of a voice. If, like me, you kinda took him for granted as 'the Rolling Stones guitarist' then listen to this album and have your eyes opened and your opinions re-shuffled. The man is superb.

Posted by The Morbid Romantic at 6:25 pm No comments: