No Manifesto: A Film About Manic Street Preachers 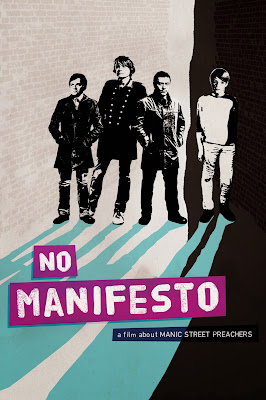 Who's responsible - you fucking are


It's been twenty something years since the mouthy neo-glam punks in eyeliner burst through the walls of our world with their youth and fury yelling their mandates and lecturing us with their iconic riff-powered protest songs, Their precocious intellect composed misanthropic dogma for revolutionists and endorsed the disenchanted to rouse from apathetic slumber. The songs were lashed with despair, hate, passion, revolt, love and vigorous two fisted aggression (now you say you know how we feel / but dont fall in love cos we hate you still) and an orchestra of crunching, spine rattling guitar work narrated with a furious vocal and again the accomplished grammatical nihilism. The brash sloganeers, a fireball of youthful determination armed with menacing politico and the intent to ravage us like a holocaust. They turned pop culture inside out - songs that heaved with political messages, unbroken prose, subtext, literary references and Nietzschean quotes and became more a snarling consumer of culture, a new breed of realism (I laughed when Lennon got shot) Now, nearly 30 years on from their fledgling cockiness Manic Street Preachers are still with us. They have carried each other through the darkness that has clouded them since the sudden disappearance of guitarist/lyricist Richey Edwards in 1995 and are now stalwarts of British music naturally evolving with their own years into a mellower, more content representation of the stirring agitators they once were.

Almost 10 years in the making No Manifesto: A Film About Manic Street Preachers by American director Elizabeth Marcus is the long awaited documentary about the band as chronicled through interviews with almost 100 fans from across the world alongside some archive footage, conversations with each member of the band and live performances from three tours. Through her use of the hand held camera Elizabeth Marcus generates an uncontrived intimacy especially when filming the band in their own personal surroundings and revealing the very ordinary lives they live away from their role in the band. It shows them at their most human - a side the public never get to see. I remember feeling mildly disappointed that they weren't in fact leaders of some anti-establisment non conformist organisation who held meetings once a week in the upstairs room of a pub. But then, if I'm honest..I never really hoped they would be.

No Manifesto: A Film About Manic Street Preachers is out now on DVD and Blue Ray HERE

It's been a while since I posted anything in here - and that's because I have nothing to post - due to personal circumstances. I hope to return soon enough. Until then....feast on this!


Posted by The Morbid Romantic at 8:55 am No comments: