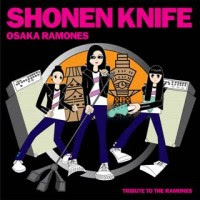 A concept possibly lost on most of our most ‘serious’ performers or, at best, greeted with hearty indifference by same self proclaimed shape shifters who, in reality, churn out vapid slabs of jaded wank rock awash with their own unearned triumphs - is the art of being oneself. It’s the only thing that matters yet usually the only thing glaringly overlooked. The milestones of their past achievements may glitter and span continents - but the shelf-life is so ludicrously short you’ll have binned it and moved onto something else before the ‘repeat chorus to fade’ option has even had the time to carry out the task it’s named after. All the aforementioned, and unmentioned, will never apply to cult lo-fi pop punk Japanese trio Shonen Knife - formed in 1981 they’ve been together (including changes in personnel) an incredible 30 years now and armed with little else but endearing honesty and catchy 3 chord sunnyness (which they’re very good at) they’ve notched up the greatest example of staying power I’ve ever known. Kurt Cobain was a huge fan and once claimed that after hearing them he was ‘transformed into a hysterical 9 yr old girl at a Beatles concert’, the band later toured with Nirvana and opened for them on their 1991 UK tour.  No strangers to a casual cover version ( their version of The Carpenters ‘Top Of The World’ is probably their most recognised song worldwide) they have performed as a Ramones tribute band - Osaka Ramones. Here then, is Shonen Knife, in that very guise as they celebrate their 30th anniversary with an album of Ramones cover songs. Both experts at the 3 minute pop/punk anthem (Ramones were, Shonen Knife are) this album is precisely scrupulous in its entirety except for a slightly more polished production than the originals and lead vocalist/guitarist Naoko Yamano’s buoyant accented voice replacing Joey’s grit edged delivery - but mastered in every other way note for note, chord for chord, style for style. The obvious tracks are here and their delivery is faultless - ‘Blitzkrieg Bop’ ‘Beat On The Brat ‘ ‘Rock n Roll High School and ‘Sheenah Is A Punk Rocker’ but it’s a combination of other things that make this a worthy album as much as it is evidence of just how good a band Shonen Knife are - the great guitar work on ‘Chinese Rock’, the proper garage sound they bring to ‘She’s The One’ or the effective harmonised vocal on ‘ The KKK Took My Baby Away’. They also tackle the lyrically darker ‘Chinese Rocks’ and ‘Psychotherapy’ with no significant problems. If, like many in the UK, you’re unfamiliar with Shonen Knife then this album is as good a place to get acquainted as any.

http://www.shonenknife.net/index.html
Posted by The Morbid Romantic at 3:22 pm No comments: