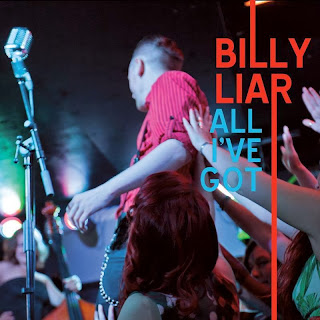 Billy Liar
All I've Got
(Unsigned)

Music’s darkest glories can be found, conceptually, in the lacerated disorder of emotion. From the bones of misery comes uninhibited self deprecation acted out by assorted protagonists in cameo lyrical snapshot roles representing the author at their very lowest. Such affected heartache claws all of us in turn thanks to our effrontery for intimacy. Consistently unguarded when at our weakest brings its fair share of wounding which is perfect subject matter for our most bitter narratives. Billy Liar’s traumatic episodes are documented like emotional postcards in the ragged acoustic folk/punk poetics of his songs. Once again the complexities of ingrained human instinct are at the heart of the matter in the pessimistic love song All I’ve Got, written about wanting to be with someone who is already in a relationship with someone else. Although the personal intricacies of the situation may have been a minefield of harrowing sorrow - the music could never be. His despair is brilliantly tuneful and brimming with an effervescent  hop skip jump energy and it’s that, that pairing of adoration and pain, that brings a soaring childlike bewilderment and maybe that’s the beauty here, the true sense of definition. The song is easy to enjoy and feels infinitely warmer than anything else he’s released up to now. It comes with groovy ‘ahh ahh’ harmonies and a chorus so buoyantly countrified it deserves to have a line dance choreographed around it. There is even a great little video of the song where he gets to fall into the arms of all the girls! This is a song that deserves to be heard by everyone for no other reason than that they’d really like it if they did..cos he’s a dedicated follower of passion.

Posted by The Morbid Romantic at 11:32 pm No comments:

HONEYBLOOD
Honeyblood are the Glasgow two-piece comprised of Stina Tweeddale (vocals, guitar) and Shona McViccar (drums). The band recently signed to FatCat Records and released their debut 7" single 'Bud' / 'Kissing On You' on the 4th November 2013.
Honeyblood Facebook

BIG UPS
Big Ups are very pleased to announce their debut LP, Eighteen Hours of Static, due via Tough Love Records on January 13th, 2014. This is the blistering track Goes Black from the album.
Big Ups Facebook

The first single from LVL UP, on a split 7" with PORCHES. out November 26th on Birdtapes and DDW.
LVL Up on Bandcamp

A Lily is the solo project of FatCat Records operator James Vella. This track is from A Lily's new EP, Lupa, out now on Know Thy Neighbour/Agoo Records.
A Lily Homepage
Posted by The Morbid Romantic at 9:20 pm No comments:

Independent Distribution announces the UK DVD release of PUSSY RIOT: A PUNK PRAYER, out to own from 25th November.

Directed and produced by Oscar-nominated producer and documentary maker Mike Lerner (Afghan Star, Hell and Back Again) and Director-Producer Maxim Pozdorovkin (Capital), PUSSY RIOT: A PUNK PRAYER features the three band members who were put on trial in Russia, Nadezhda Tolokonnikova, Maria Alyokhina and Yekaterina Samutsevich for performing a satirical rock song in Russia’s most hallowed Moscow cathedral.
Filmed over the course of six months, this film tells the incredible story of three young women: Nadia, Masha and Katia; members of the feminist art collective Pussy Riot who performed a 40 second "punk prayer" inside Russia's main cathedral. This performance led to their arrest on charges of religious hatred and culminated in a trial that has reverberated around the world and transformed the face of Russian society forever.
With unparalleled access and exclusive footage, Lerner and Pozdorovkin’s Pussy Riot: A Punk Prayer looks at the real people behind their now famous colourful balaclavas.

Moving from farce to tragedy and back again, the film explores how political and religious forces contrived to make an example out of three young artists who dared to challenge the accepted norms of society. With Nadia, Masha, and Katia, Russia's ruling powers got more than they bargained for. Are you a ready for a Pussy Riot?
PUSSY RIOT: A PUNK PRAYER featured as the opening night film at Sheffield Doc Fest, at the East End Film Festival in London and Open City Doc Fest and received its world premiere at the Sundance Film Festival.

https://www.facebook.com/PyssyRiotTheDocumentary
Posted by The Morbid Romantic at 8:02 pm No comments:

Bad Religion is releasing a Christmas album 'Christmas Songs' this month. The album features 8 new studio recordings of traditional Christmas hymns and an alternate mix of their single "American Jesus" by Andy Wallace. Co -songwriter and guitarist Brett Gurewitz says "This might be the most subversive album we've done. To me, what the album is indirectly stating is that this music, and thus the world, can be powerful and beautiful stripped of god and religion. These are just really good songs, and a historically non-religious band like Bad Religion can perform them with as much power and feeling as anyone."

The band's iconic vocalist and co-songwriter, Greg Graffin has a personal connection with these songs. Graffin got his start as a singer when he was young boy in a church choir. His instructors found him so remarkable that he received a scholarship to a choir school. And thus, the voice of Bad Religion was born.

In a world still brimming with rampant anti-intellectualism, inequality and oppression, Bad Religion’s signature brand of sonically charged humanist dissent is as relevant as ever.  And this Christmas season, just a little more ironic.

For more info go to www.badreligion.com
Posted by The Morbid Romantic at 5:18 pm No comments: