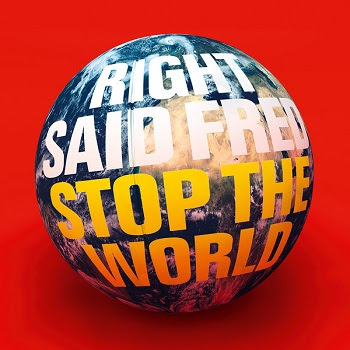 They unrolled their catchy, tongue-in-cheek, disco beat pop songs across the face of the early 90’s and secured a level of success you possibly didn’t envisage for them. Debut single ‘I’m Too Sexy’ reached No 1 in the American charts - the first time a debut record had done this since The Beatles. Three more hit singles quickly followed (Deeply Dippy, Don’t Talk Just Kiss and Those Simple Things) duly gifting the album that spawned them - debut ‘UP’ - platinum status. The quirky, good-time tunes rattled with humorous innuendo (and a funky bassline) earning the band - which consisted of brothers Richard and Fred - plus hirsute buddy Rob Manzoli - mega success worldwide.  Though further singles and albums followed they failed to follow in the footsteps of earlier releases and momentum was lost. Their popularity dropped like stones and dragged them below mainstreams radar ( though Germany still loved the bones of them and Japan politely snuggled up to them also)

New album ‘Stop The World’, though maybe not as quick heeled as earlier stuff, still bristles with the chirpy, jingle-jangle moments they’re renowned for. Uncomplicated slabs of electro beats and obvious pop additives are the dominating parties crafting the direction and shape of the music. It shifts, momentarily, between electric and acoustic with subtle nods to ‘almost’ techno - as the title track and ‘Waiting For A Train’ are built upon with great effect. The lyrically serious, or more serious, ‘We Are All Criminals’ opens into the most light-hearted of choruses - the much craved ‘pop hooks’ find a place here - and within the acoustic guidance of possibly their strongest track ‘Two White Boys’. It’s Right Said Fred - fun packed jovialities and catchy tunes - with nothing ever likely to make a dent in the armour of ‘groundbreaking’ music - but they’re not losing sleep over that anyway. As he once did sing 'i'm too sexy for my car, too sexy for my car, too sexy by faaaaaaar’  Indeed!

Posted by The Morbid Romantic at 10:38 pm No comments: