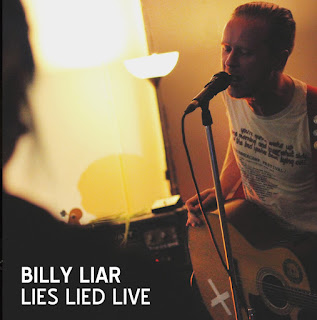 Racing through nine songs with the spirited intensity that defines him...this voracious cultural expressionist from within a turbulence of monologues...the skewed artiness of his freewheeling folk punk and true, rough-edged DIY. At times he is, for sure, the charged up narrator of his own frustrations snatching up personal wreckage from the alleyways of emotional squalor in a bombardment of impulsive eulogies. But he is as tender as he is proactive, a deep seated idealist, philosophically subjective enough to not always be ploughing at us with rebellious objection.


Opening song Some Nights is a whirling, hair-trigger of frenzied guitar that clocks in at just under two minutes long....followed by recent EP track Change his glorious homage to contempt through frustration (Is that too much to ask?/ Probably!) he sneers with a backbiting, vitriolic dismissal. The quick/slow/stop/start of Who I've Become nurtures poetic reflection underneath the blustering,hard faced exterior its delivery encourages it to adopt. Lyrically he flits between the wry and the clever, his storytelling narratives creating from the space between thought and expression.

His derisive, post-relationship break up summary The Coast Is Clear rattles with a contentious indifference (I will see you again/ And we'll pretend to be friends) its barely veiled subtleties dashed with realistic cynicism. Further songs include All I've Got, Is It Me?. Noose and a nod to the brilliant Withered Hand with a cover of No Cigarettes.


Recorded one night in April at Edinburgh's Banshee Labyrinth...songs of urban adolescence and prevalent adulthood from the iconic roaming troubadour in the prolific style and resplendent sharpness of instinctive creativity.

Posted by The Morbid Romantic at 5:03 pm